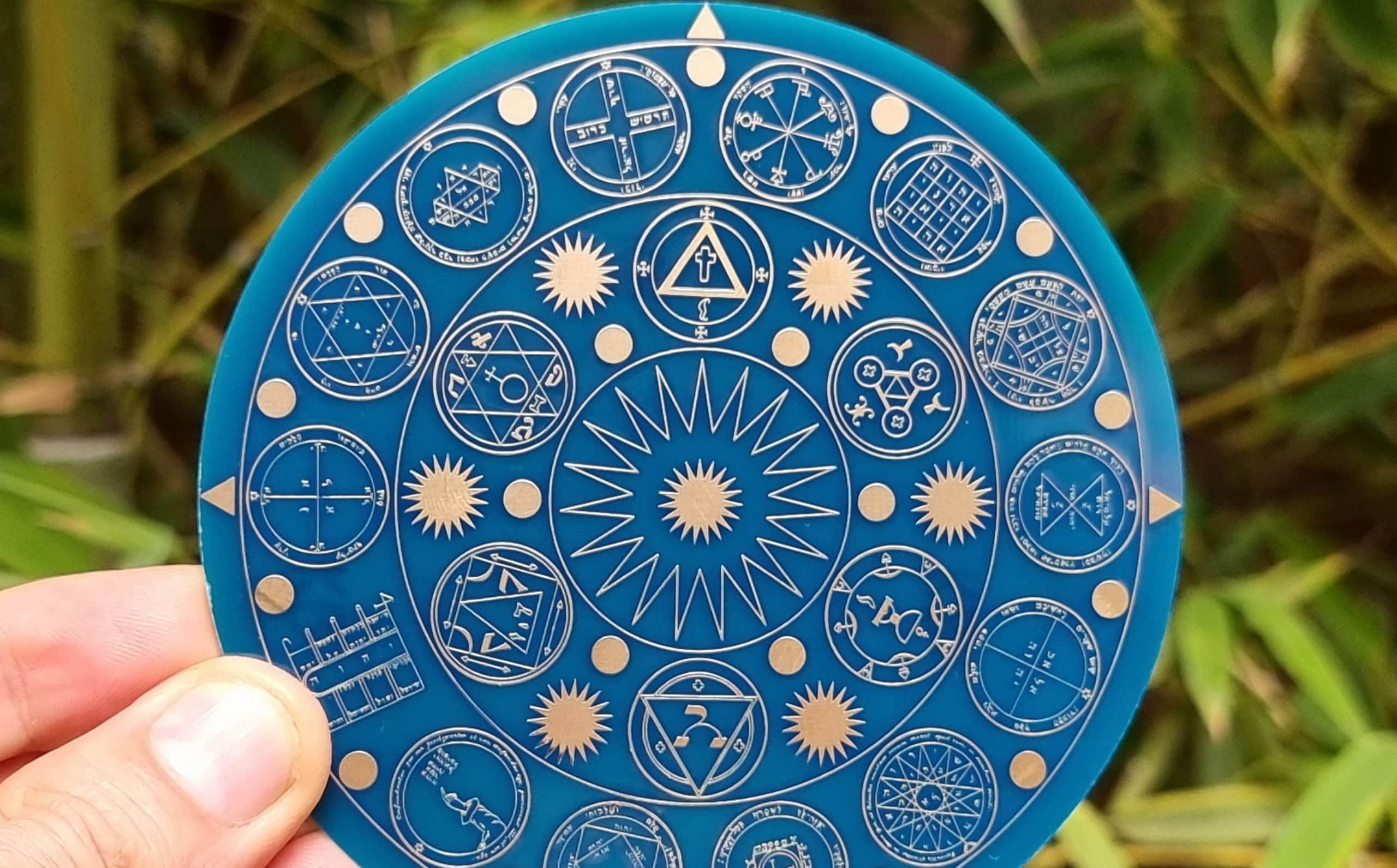 The production of this disc is the result of the collaboration between Monseigneur Damien Théodore Diefenthal, the Reverent Father Jan Diefenthal and Raphaël Dajafée.

Damien and Jan distribute some of my records on their shop Bo Bon Cool. Through our exchanges around magnetism and radionics, they introduce me to Raphaël Dajafée and his creations.

A radionic creation by Raphaël Dajafée

The shield of Hermès is a creation of Raphaël Dajafée, a medium artist of French origin. For 25 years he has been studying form waves, radionics and esoteric sciences. Learn more radionicinternational.com

This disc has 2 different sides: on the front Le Bouclier d'Hermès, on the back the Lakhovsky H9+ circuit. The Shield of Hermes has a extensive protection function, the Lakhovsky circuit will bring a scalar wave which will carry the information emitted by the shield towards a person, an animal, or a witness object (photo, letter, etc.)

The Shield of Hermes

It is an extraordinary radionic transmitter which brings together all the pentacles of the esoteric tradition.
It makes it possible to act in all the fields of action of the pentacles which are integrated into it. The Shield of Hermes works like a radionic clock which activates each pentacle according to the needs of the moment and the personal astrological chart. The Bouclier d'Hermès provides universal protection to the wearer.

The proportions of the orbits of the solar system allowed me to realize this extended version of the Lakhovsky model, the H9+. Previous Lakhovsky H9 models had 12 circuits, this new design has 5 circuits on the outside for a total of 17. The disc emits more harmonics, its vibration rate is even greater.

To be used "consciously"

Intention is very important for optimal effectiveness.
It's about saying or thinking, the next phase. It can also be written on a sheet placed on the disc:

“Day after day, every second, every minute, every hour activates the pentacles of the Shield of HERMES and I permanently benefit from the benefits and the help of the pentacle(s) that I need and that without no inconvenience“

The 14 Pentacles of the Key of Solomon

The outer pentacles come from the manuscripts Clavicula Salomonis (The Small Key of Solomon) written between the 15th and 18th century, here they are from the noon position:

The Inner Pentacles were established by Dom Bernardin. Dom Bernardin was a very pious man who left behind him one of the most consequent works in the field of white magic.