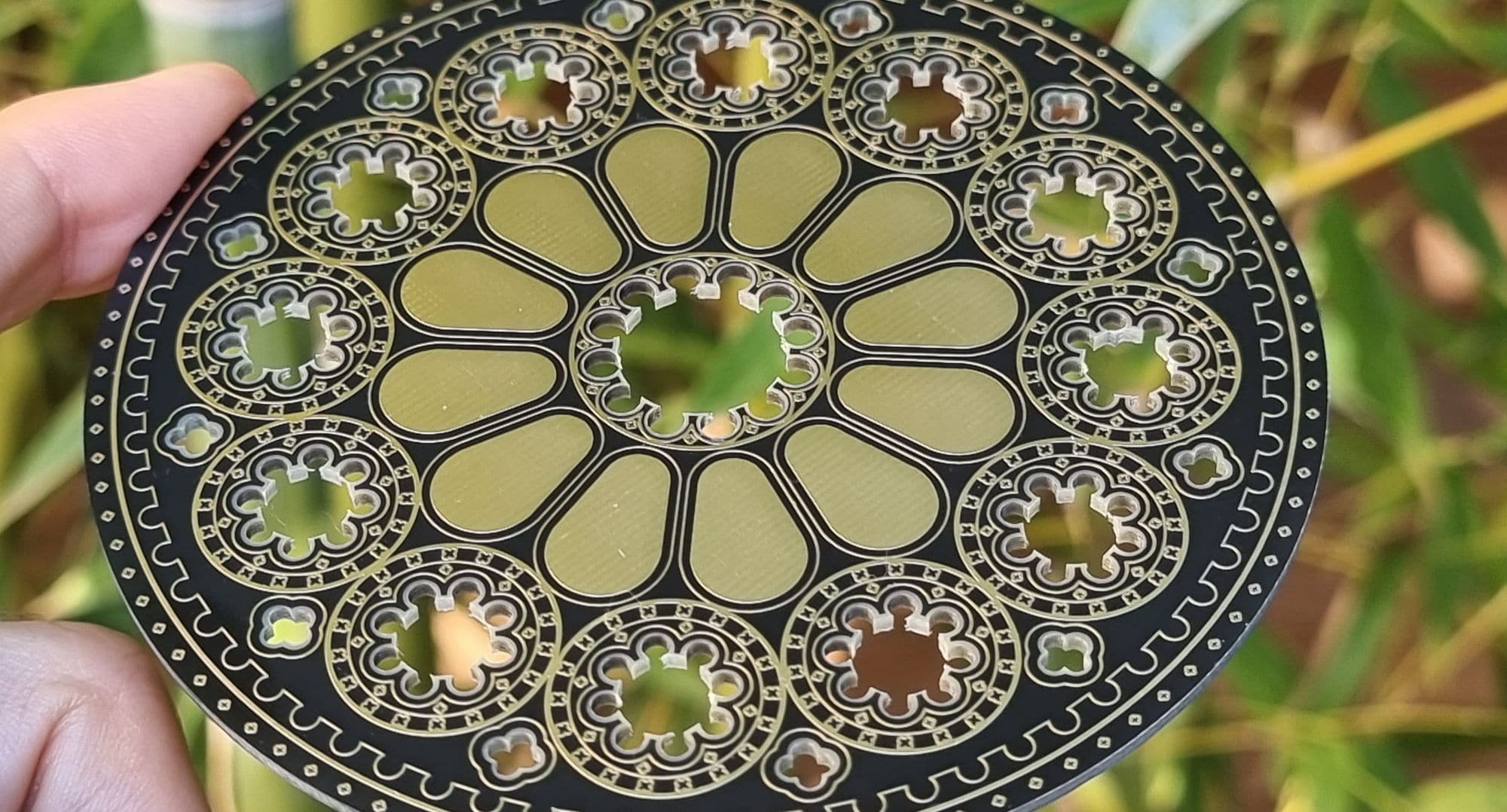 A fascinating shape, the labyrinth of Chartres

This drawing has surprised for centuries, it has filled the Cathedral of Notre-Dame de Chartres. This Gothic cathedral is the most complete and the best preserved in France. The labyrinth of Chartres, is a work of the 12th century, it is a circular geometric figure of 12,89 m in diameter. You enter through the single entrance, and you walk through the entire labyrinth to find yourself in the center. Without really knowing why, I had to transform it into an antenna disk. I quickly designed a wireframe version of the maze on a 10cm disc.

I felt that I was not done with this shape, I needed to refine it. A single path to the center, it is a real antenna with one son! I do this, I make a positive version with a continuous metallic path, and a negative one on a 20 cm disc. This labyrinth now exists with 3 aspects, fascinating!

I feel a vibratory function in the 122 circular alcoves circling the labyrinth and welcoming candles in the Cathedral. I transform the alcoves into mini discs in the positive version in order to make the antenna vibrate and diffuse its radiation.

The labyrinth, like an oscillating circuit, rebalances the cells of the body at the vibratory level by restoring their original frequencies. This effect restores a harmonious vibratory field and removes energy dysfunctions, which are the causes of many diseases. The shape of the labyrinth is also known to calm the mind.

The Rosette of the Cathedral

The large rose window of Chartres Cathedral has a diameter of 13,36 meters, it is one of the largest in the world. It is a little bigger than the labyrinth. It overlooks it, we quickly notice the presence of forms with cavities in the center and on the periphery. There is of course one in the center of the labyrinth, and then there are the 122 alcoves on the outskirts.

I then stumbled upon a documentary on free energy which made the parallel between the cavity magnetron and rosettes of Cathedrals, and there it becomes the revelation! The report goes quite far, I prefer to leave it there or one Cathedral was entirely designed to resonate and diffuse the powerful sound of the organ outside the entire building, through its rosettes designed without stained glass initially.

And there is this documentary which also comes "to resonate in me":

A contemporary form, the cavity magnetron

This resonant cavity shape has been used since 1940 in the design of the magnetron.
The magnetron is a device that transforms the kinetic energy of electrons into electromagnetic energy, in the form of a microwave. The electrons are emitted at the center and are deflected in a spiral path in the resonant cavities. This technology is used in household radars and micro waves.

The parallel between the magnetron and the forms composing the rosette seems to show us that we have here a form made to amplify what will cross it. This shape is present in most cathedrals. We also find inside the domes located on the ceilings, acoustic cavities acting here also as resonators.

A study on the sound architecture of cathedrals

Artist Tanya Harris in 2013 went to listen to the structure of 4 cathedrals with a speaker and water, she produced 4 designs cymatic, whose designs are reminiscent of rosettes. It is amazing how such structures can silently draw these patterns. https://tanya-harris.com/the-architecture-of-sound/

As I designed the labyrinth disc, I design a rosette disc. Its design is long because it makes me simplify the shapes, while trying to stay faithful to the original. I simplify the border of the rosette by taking the design of the alcoves of the labyrinth, but oriented towards the interior.

A Cathedral simplified in a cube

I now have all the elements to rebuild the cathedral in a cube:

Find my products on Etsy. You can order them. You also help me in the pursuit of my research 🙂