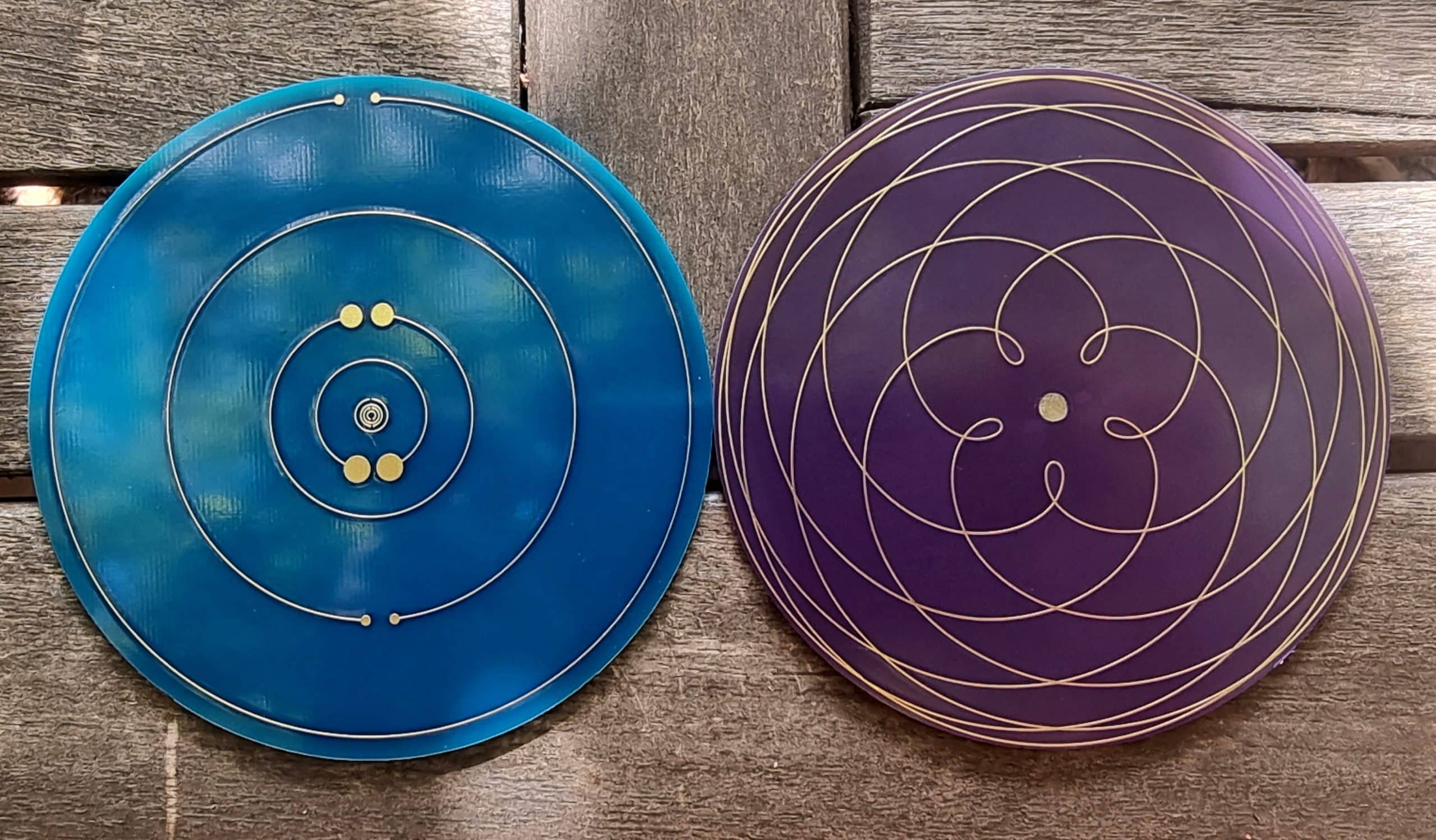 This disc is based on the 8 planets of the solar system:
Mercury, Venus, Earth, Mars, Saturn, Jupiter, Uranus, Neptune.
This pattern is present on both sides in the same way. With this version, the 2 identical faces will vibrate together.

A solar system in your pocket

The orbits of the 8 planets of the solar system are represented here in their proportions.
The size is circles is according to the size of each of the planets.
However the scale used for the orbits and the size of the planets is not the same.
Pluto is not represented, because its orbit is elliptical and is not in the same plane of the other planets.

The 8 orbits here make up a Lakhovsky circuit with proportions of the circuits directly taken from nature and the universe.
The progressive opening between the planets here follows the golden ratio.

Georges Lakhovsky had met Nicolas Tesla, the latter helped him to find the right proportions of the circles of the antennae of his multiple wavelength oscillator (MWO). There are many versions of MWO antennas, they have been improved over time.
In my research, I retained the proportions proposed by Jacques Ravatin as well as those resulting from the 9th harmonic (H9).
By superimposing these proportions with the orbits of the solar system, we see that they coincide almost perfectly (see images opposite).
If we observe for example the circles of harmonic 9, they define “allowed” or quantized positions for the orbits of the planets. Going further, we also find that the asteroid belt is placed on the 6th circle. The laws of nature and the universe seem close to harmonic 9.

Nicolas Tesla had discovered it with the importance of the numbers 3, 6 and especially 9.

The Pentagram of Venus

This pattern describes the distance between Earth and Venus in 8 years.
If we compare the orbits of each planet in our solar system, we find a similar pattern.
The particularity with Venus is that every 8 terrestrial years correspond to 13 Venusian years.

A drawing from the solar system

The distance between the 2 planets draws a perfect flower with 5 petals.
Venus is observed from the Earth, we also the sun which "rotates" around the Earth with a fixed distance. After 8 rotations of the sun around the Earth, Venus completes 13 cycles and draws the complete 5-lobed pattern.
5, 8 and 13 are also in the Fibonacci sequence.

A sighting from the early 19th century

This pattern was discovered by James Ferguson in 1799 in his book Astronomy Explained Upon Sir Isaac Newton's Principles.
In James Ferguson's illustration we also have Mercury's orbit. We see that the drawing does not "loop" completely, because the years of Mercury and Earth do not match.

Site on the pentagram of Venus

In order to know more precisely effects of these waves of forms, I carry out radiesthesic measurements by evaluating the same criteria as for spiral discs and Lakhovsky H9.

The characteristics of these shapes are different from the previous shapes measured.

Characteristics of the Lakhovsky Solar System

The anti-clockwise direction of rotation is of a dispersing nature (Ying). This characteristic is balanced by the emitted Belizal color, Magnetic Red, which is stimulating in nature (Yang). The resulting action is Harmonizing, it is the balance between the dispersant and the stimulant, it is an action that will aim to balance energies of the person who is going to be exposed to this form.

Characteristics of the Venus Pentagram

Clockwise rotation is stimulating in nature (Yang). This characteristic is temporized by the emitted Belizal color, Magnetic Blue, which is of a dispersing nature (Ying). However, the resulting action remains energizing, it seems here that the rotation has more weight than the Bélizal color. The action of the Pentagram of Venus will therefore stimulate and make increase in energy the person who is going to be exposed to this form. It is an action comparable to that of a dextrorotatory spiral.

Read the rest of this article